The term Dispensationalism is a system of theology, which seeks to unfold the absolute truth of Scripture. 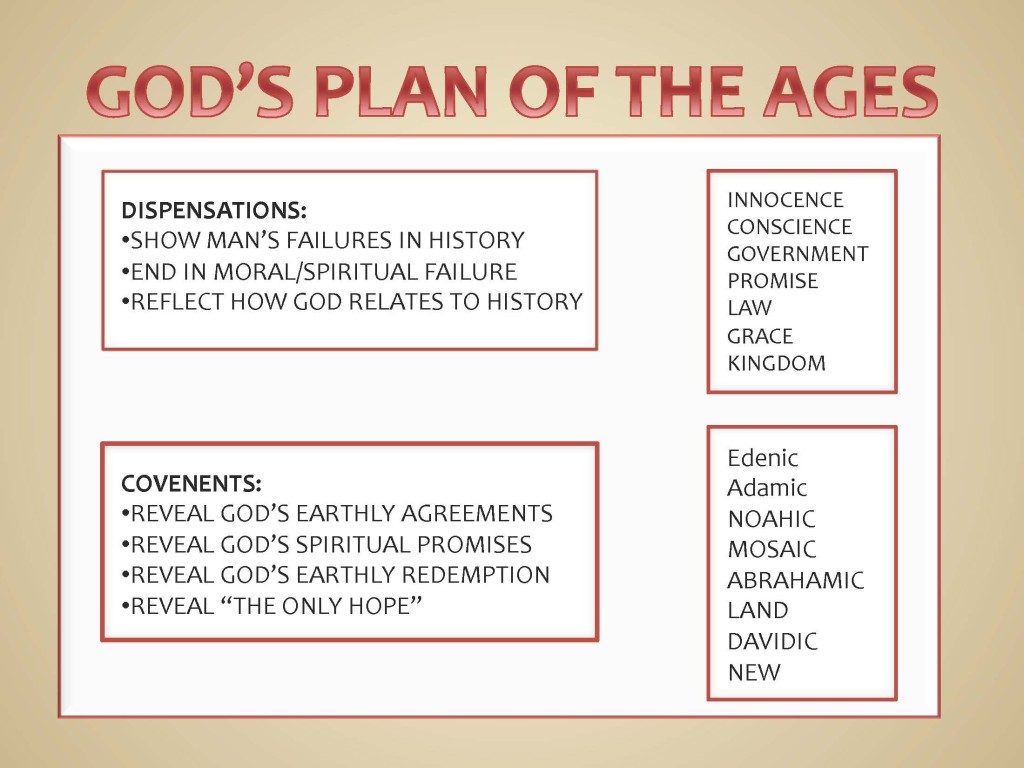 “Dispensationalism is a system of theology which views the world as a household run by God. In this household-world God is dispensing or administering its affairs according to His own will and in various stage of revelation in the process of time. These various stages mark off the distinguishably different economies in the outworking of His total purpose, and these economies are the dispensations. In this system there are usually, but not always, seven such dispensations.”

One can define Dispensationalism as: God’s distinctive method of governing mankind or a group of men during a period of human history, marked by a crucial event, test, failure and judgment. From the divine standpoint, it is a stewardship, a rule of life, or a responsibility for managing God’s affairs in His house. From the historical standpoint it is a stage in the progress of revelation.

First is the method regarding the interpretation of Scripture called the consistent literal or plain approach throughout the whole of Scripture. This approach applies the proper rules of grammatical usage of the text with appropriate deference given to the historical and contextual position of the text within the entire Scripture. In short you read Scripture as you would any other piece of literature where the author seeks to communicate with the reader. (See Appendix)

Israel & The Church are Separate:

The Second essential characteristic is a clear distinction between the purposes and promises of Israel and the Church throughout Scripture. Finally, this system realizes that God’s main purpose in this world is to bring Himself glory. 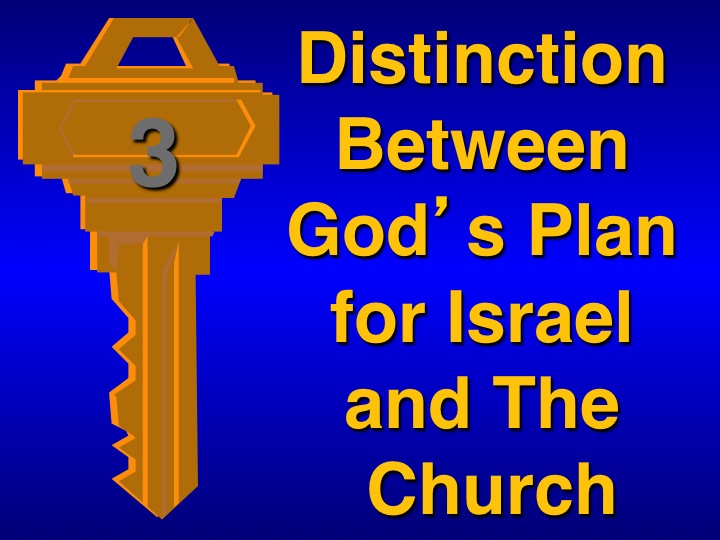 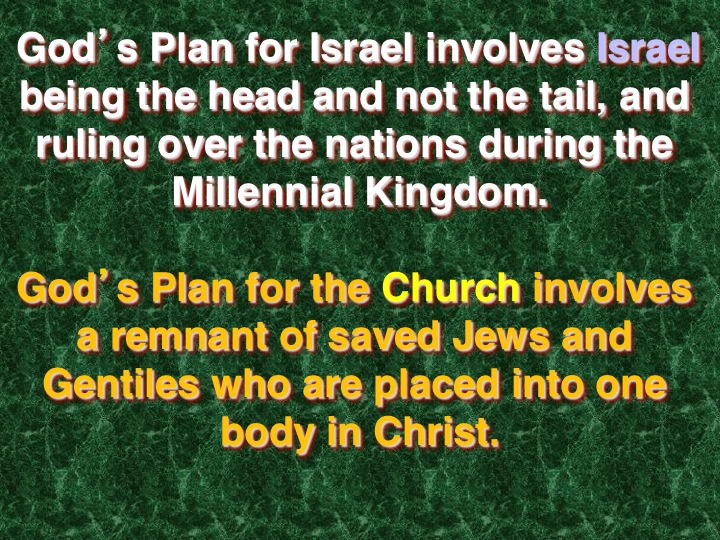 During the various ages of time (Dispensations) from creation to the New Jerusalem and eternity future mankind has responsibility to respond to God according to the degree of revelation that He has provided about Himself and His requirements for mankind.

That is, mankind has a degree of responsibility to respond to God according to the level of revelation He has given him. This revelation progresses throughout time. Progressive revelation views the Bible not as a textbook on theology but, the continually unfolding revelation of God given by various means throughout the successive ages. In this unfolding there are distinguishable stages of revelation when God introduces new things for which man becomes responsible. These stages are the economies, stewardships, or dispensations in the unfolding of His purpose. Dispensationalism therefore, recognizes the unity of His purpose and the diversity in the unfolding of it.

One very important aspect of Dispensationalism is the element of time. Time and space were created according to Genesis 1:1 and man lives in time and space on this planet. The failure to recognize this realism can afford much distress to sound Biblical interpretation. Some interpreters view the bible as all spiritual. They refer to Jesus’ words to Pilate in John 18:36 where He says, “My kingdom is not of this world.” According to this verse some think they have hermeneutical license to evaluate each verse in the Bible as being “Spiritual” and not literal. That is, since Christ says His kingdom is not of this world then Biblical interpretation should not have to adhere to the normative rules of recognition of time and space. So they view all scripture as timeless or spiritual and there are no real eras or times to concern themselves with. This “spiritualizing” the text leads to many private interpretations and God’s communication to us is fractured and confused because the text can mean anything the reader decides it means. Peter warns us about this in 2 Pet 1:20 This leads to the next important aspect of Classic Dispensationalism. That is, the Bible must be interpreted literally.

This subject word, Dispensationalism, means the acting out or administrating, the concept of managing and the act of dispensing something to someone such as a responsibility to fulfill. The Greek word for dispensing is Oikonomia, from which we get our English work economy, means to manage something, to regulate to administer or plan something out. The central idea of dispensing is to manage the affairs of a household as a steward. We see the word used in the New Testament twenty times. (Luke 12:4, 16:1-2, 3,4 3,8; Romans 16:23; I Corinthians 4:1, 2; 9:17; Ephesians 1:10, 3:2, 9; Colossians 1:25; I Timothy 1:4) Galatians 4:2; Titus 1:7; I Peter 4:10;) We see God dispensing grace for example with the present dispensation of grace and the responsibility that He has given us to respond to him through belief and walking with Him (Ephesians 3:2). This is of course a different level of responsibility to God that man has than the period of the dispensation of Mosaic Law. Some such as Scofield refer to this responsibility as a test. So therefore, we can say that man is required to respond to God as a type of test according the revelation He has provided of Himself and his requirements.

Characteristics of A Dispensation:

Therefore, one may define Classical Dispensationalism as: A system of theological interpretation, which, seeks to unfold the absolute truth of Scripture. In it the world is viewed as a household over which God dispenses or manages His affairs and man has accountability to respond to God according to the degree of revelation that God has provided during each progressive dispensation. Some refer to this as a world history view as revealed in Scripture. In this system Scripture text is taken literally within appropriate grammatical rules and governance of usage. The promises to Israel and the Church are consistently distinct throughout Scripture and all the while God’s glory is paramount.